Weather in Seattle is strange.  Sure, it rains much of the winter.  But when it does clear up, we tend to get ground fog.  It's like the clouds just don't want to turn us loose.  The fog will go up a few hundred feet, then it's bright blue and clear above.

But...it's a pain when the airport with your airplane are under those few hundred feet of puffiness. 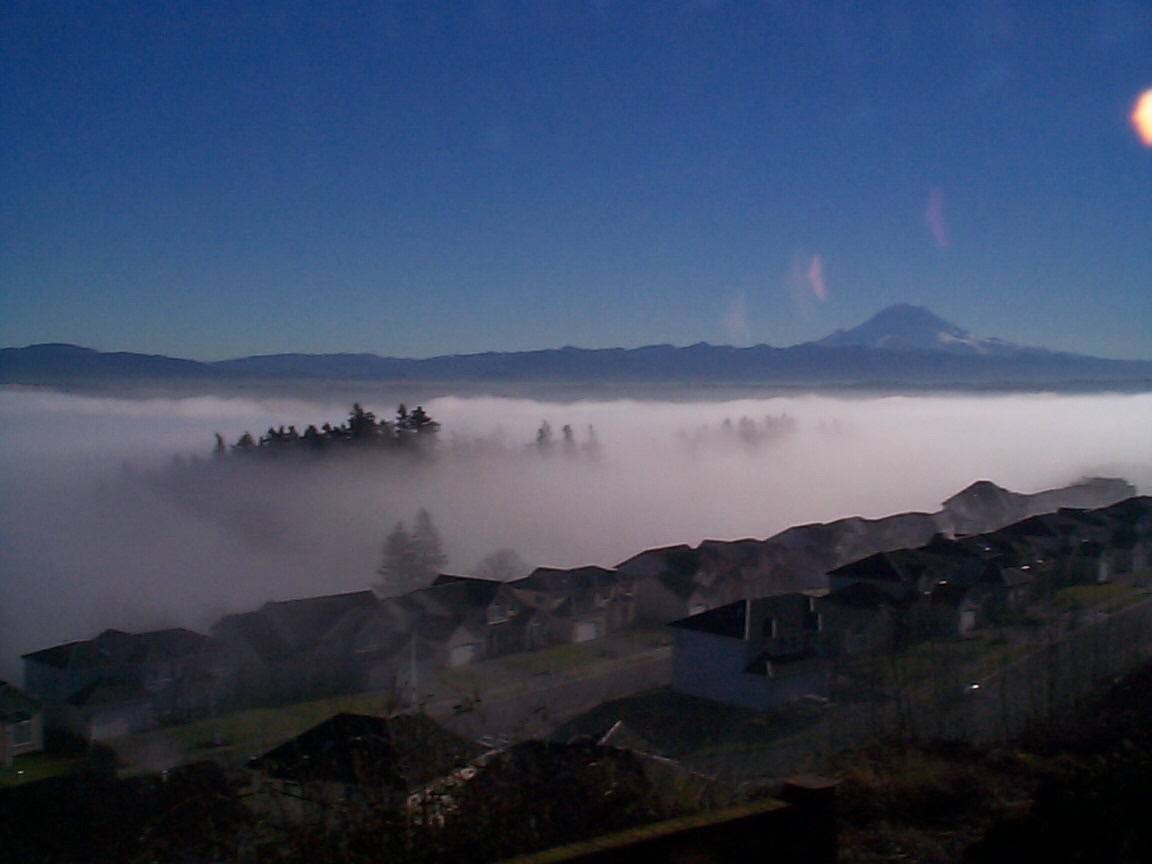 Some days, the fog *does* go away.  The weather warms up, or a nice  breeze swings by to blow the big dirty mass away.

That's what happened a week or so ago.  Morning was fogged in, then a northwest breeze sprang up and the valley cleared out.  I had just completed the new seat backrest, and was eager to give it a try.  Out to  the airport, mount up, and launch.

Climbing to 1500 feet, I noticed the fog hadn't actually gone away.  The wind had blown it a few miles south.  I turned that way, curious.  I could see the tops were just at 1200 feel MSL (about 700 AGL) and the top of the bank looked fairly smooth.  I thought...just for a moment...about trying to shoot some touch-and-goes on the tops.  But there was always that nasty little bit of FARs warning me away.

As I got closer, I realized the top wasn't as table-smooth as I thought.   It looked lumpy, like a herd of ghostly-white elephants slowly trudging away downwind.

But then I noticed the stragglers.  There were a couple clumps of cloud, lagging the herd by a half-mile or so.  They looked like a pair of rambunctious calves, still frolicking away as their elders walked heads-down, unseeing.

Unbidden, the Fly Baby arched over to meet one.  I flew by...and realized that the lump of cloud was thin enough to see through.  I could see the Cascade range, ten miles away, through the mist.  Surely, the cloud clearance rules refer to *visibility*...?

So the calf got itself a noisy new playmate.

I zipped around it a few times, mist whipping past, giving the feeling of tremendous speed.  You don't feel it that often, except when landing when your senses are attuned to something else.

I cut through a thinner section, marveling of the lack of physical sensation.  It seems like the air should feel wetter, that the shriek of the wires should vary, my cheeks get colder, or that the nose should tell of some scent or the other.  But nothing; it was like flying through any other batch of 14.7 PSI air, but for the shreds of white whipping past.

It felt...I hate to say this...no different that flying through a cloud in a closed-cabin aircraft.  The coat, the gloves, the goggles seemed to isolate me from the new playmate the same way plexiglass and metal would.

As I flew away, I looked over my shoulder at my late playmate.  No angry momma had come out from the cloud-herd to collect him.  He was sailing along, alone.  Looking...well, looking a bit lonely.

Return to The Stories Page